Well, Jay has been sick this weekend with a fever, a slight cough and a runny nose. Saturday was pretty miserable and Sunday he just got sick of it all and really wanted to go "bye-bye".
Here is him actually sitting down to watch part of a movie (I got out Finding Nemo). 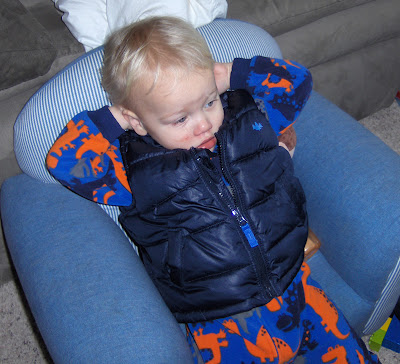 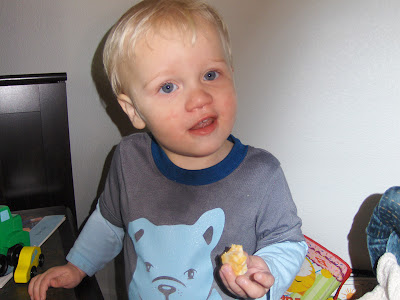 Grandma watched him on Monday, and we have some great pictures from that day too. Here is a quick preview: 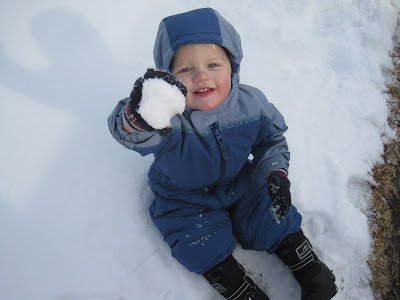 Monkey (his lovey) got a "bath" in the "wah-hee" (laundry) today:) It was amusing to see Jay's reaction as monkey went into the washing machine and he couldn't play with him. First he thought it was funny for monkey to get his head wet. Then he started whimpering and asking for him. He did not take a nap without him, and when he noticed him on the drying rack above a register an hour later, he was so happy...and I ended up blow drying monkey the rest of the way dry so Jay could play with him again. Monkey has also had several diaper changes, plenty of sips of water, and has had his temperature taken plenty of times the last few days.

I have been forced to stay home all day Saturday and Sunday with a sick darling (until John got home from work at 4:30) and I snuck out to Target to get groceries and a prescription. Therefore I have gotten a bit of cleaning done (not near enough) and I have made butterscotch cookies, Stromboli, and pop'n'fresh BBQ cups. It has been so nice to have time to cook food and enjoy it. When I got groceries tonight I wasn't even stingy and bought things that I could make meals and snacks with because it meant I would be happy and full (which is very good for a pregnant mommy with a sick kid).

I wish I could WORK on computer stuff while I am home with Jay, but every time I sit down at the computer for longer than 2 min. Jay wants to sit on my lap and color, or play the "uh,uh" game, or watch "A,B,C" or "babychoochoo" videos.
He is a very big "hep" in the kitchen. He helps me pour in the flour and the chips, he pounds and rolls the dough for me, and loves stirring anything!

My back has hurt more this week, and If I had any time at all, I might think about going to a chiropractor, but I can't think of a day or week when that would even work.
I am kind of tired this weekend too, because I have gotten up in the middle of the night with Jay. I don't really mind the middle of the night though, as long as I can get back to sleep.

I have struggled with wanting to be at work because there are lots of things going on that I need to be there for, and being home with Jay because he is sick. We have never really had this issue before, because John was a stay-at-home dad last winter. I guess the hardest part is that he rarely acts sick. The runny nose this weekend is enough to keep him home and not have anyone else have to deal with it though. I wish it were warmer so we could go outside and play. Neither one of us is good at sitting in the house all day. I need to pull up some of those "activities for kids" websites from pintrest so I can keep us both entertained.
Here is what we did on Friday:

Grr.. no sound. No time to fix it now.
That's about all my ranting for today.
Posted by Angie at 8:16 PM