Jay and I went to Denver on Sat. because my sister, her husband and thier youngest little girl was in town. We hung out with them and my brother and sister-in-law. We had a blast.
Lori, Livia, Christine, Jay and I went for a walk to the park. 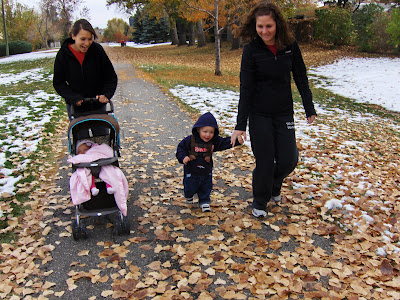 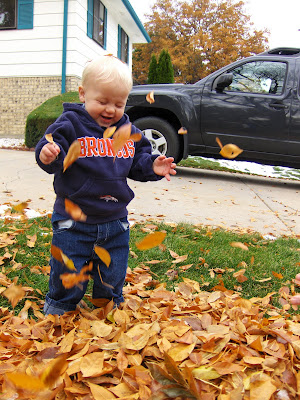 Jay enjoyed touching Livia's hair. I think he was petting her. 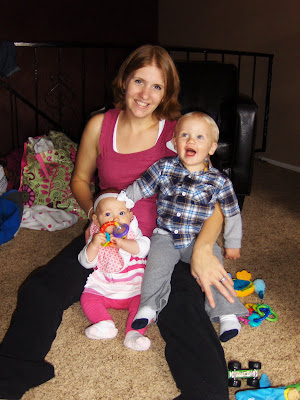 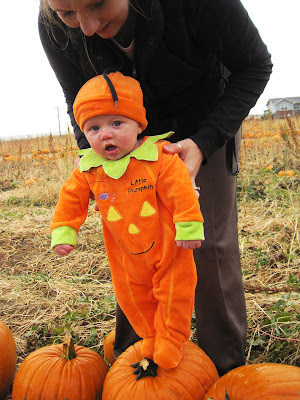 Here is Livia in it. 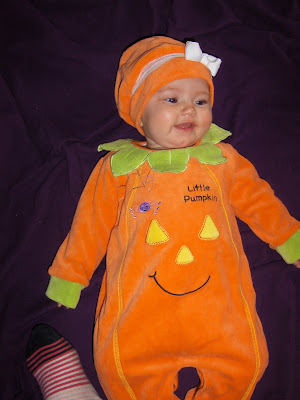 We went to a "Trunk or Treat" event at a nearby church, and it was perfect for our little kids. Not too busy, not too crazy, just some candy, some games and some cute pictures. 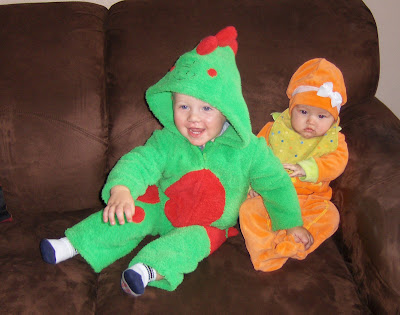 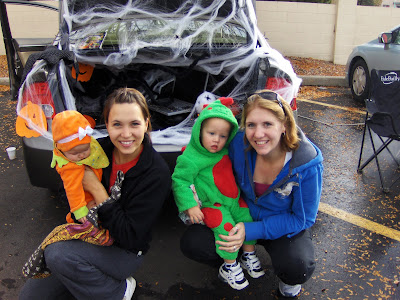 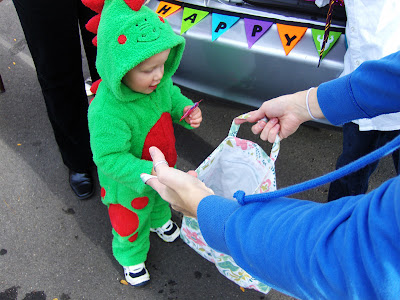 Here's a video of Jay hanging out with Livia. Kind of dark, but funny at the end.

I have another post in mind for some of these pictures: 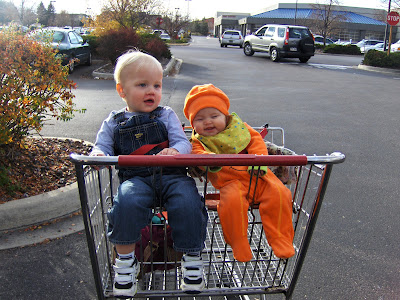 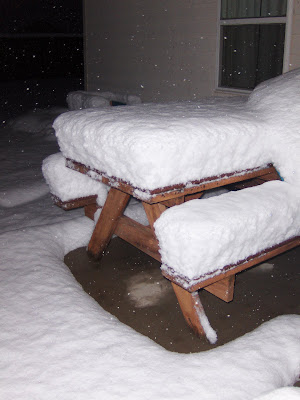 It was a wonderful day today. John had the day off, I had a snow day, and it was Jay's first snow that he could actually play in. When he woke up he walked right up to the window and said "wow!" about 10 times. I only got the end on video.. then he was interested in his early Christmas present from Grandpa and grandma.

John was out at 7am pounding on trees to shake the snow off the leaves. He also shoveled off the picnic table and a few other places. One of our branches in the back did break, but we saved the rest. This is also significant because ever since I have known John (8 years) he has always plowed snow when it snows. With his new job, he no longer has those responsibilities and it is pretty nice. 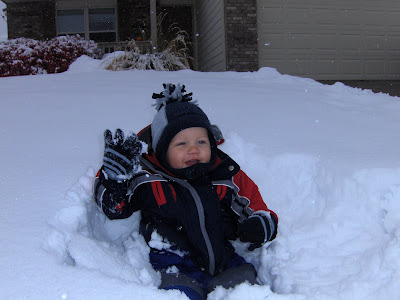 We ended up going sledding in the yard. We invited the neigbor boy to join in the fun, and they fit in the sled so nice. 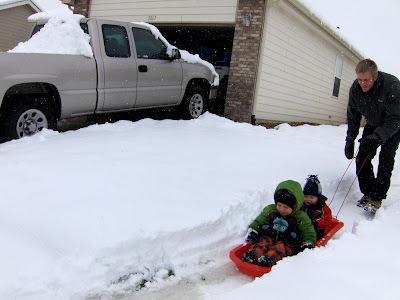 New things Jay can say:
Chugga Chugga, Chooo, Chooo (chuhh, chuhh, chooo, chooo)
Socks (tak), Shoe (tuuuu)
WOW
Cat or Hat (aat)
Nose (nuuus)
Bellybutton (bbbttt)
Eye (yyyyyy)
I say one, he says (tuuuu)
Milk (mrk) (hand sign squeezing together like milking a cow)
Yougurt (do-dur)
Cracker (or any snack) (da-dur)
No, No, No (nu,nu,nu and he shakes his finger) (he also usually does what he is not supposed to at this point like eating rocks, throwing his food on the ground, or climbing on the chairs.)

Since John and I BOTH had the day off Wed. we took Jay to another pumpkin patch I heard about. It was a little further away than I expected, but judging by this picture...totally worth it: 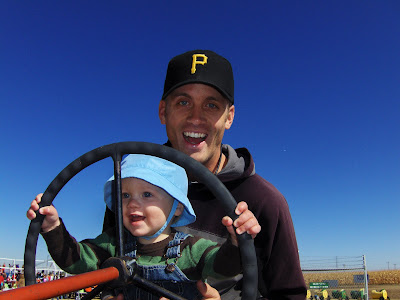 We did some normal outdoor things, like.. checking out the goats, 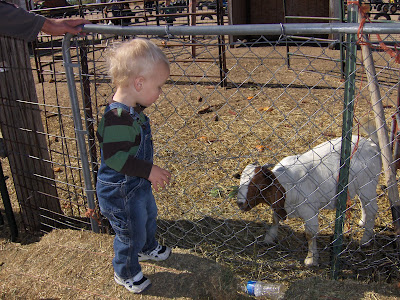 Climbing in the hay, 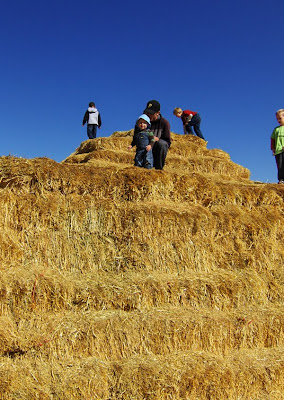 Then we decided to put Jay on his first barrel train ride. 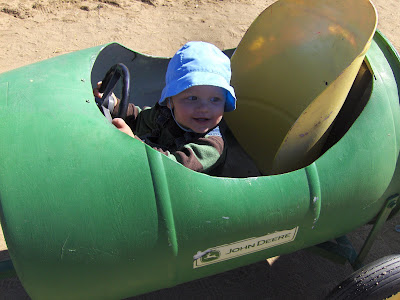 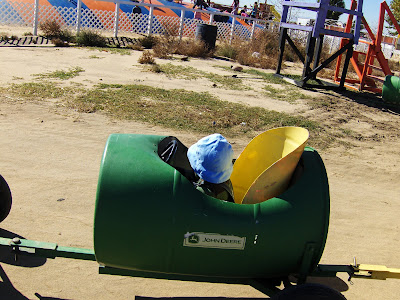 John followed the little blue hat (that was all we could see of him) halfway around the track, but he was fine, so we let him have his ride:) 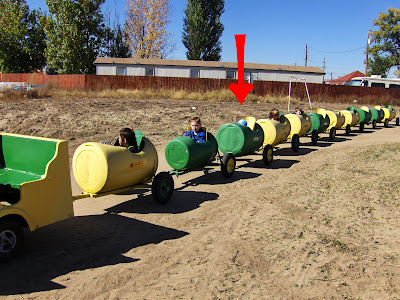 Of course Jay's favorite thing was grandpa's version of a tractor...the Dukes of Hazard lawn mower:) 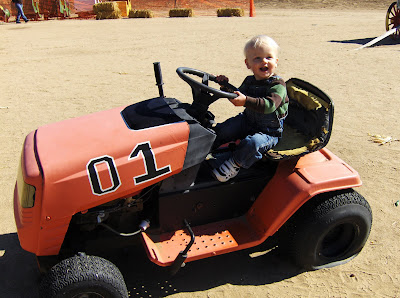 He was even doing the "pbbbbb" and "rrrrr" sounds 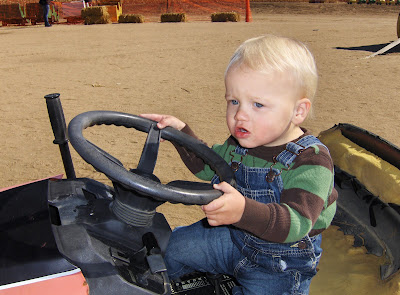 He definetly did not want to take the time to pose for pictures with Mommy. 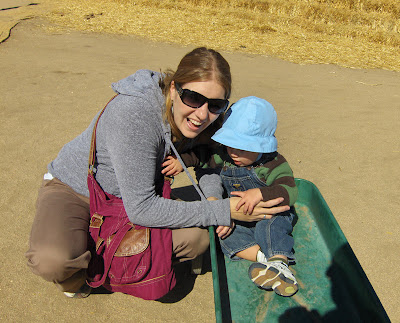 I took this picture for Caleb and Isaiah who love all things "Cars". 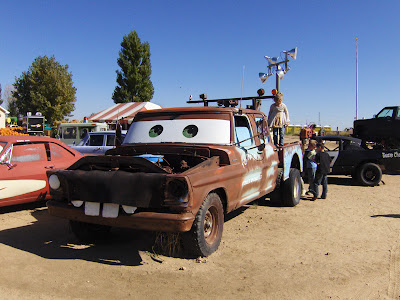 This is what used to be a dead tree in our backyard. 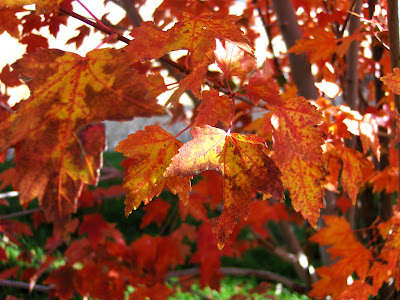 Now, it is perfect for the new found sport of "leaf picking" 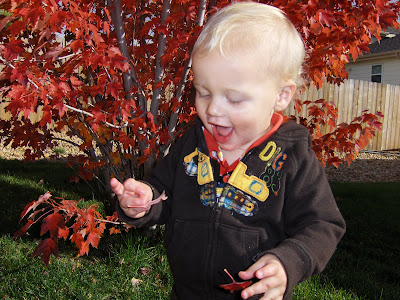 Or as Jay likes to call it "leaf eating". 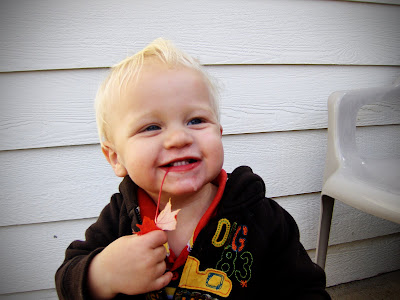 Jay won't really look at the camera anymore so most of my pictures of him are on-the-go:) 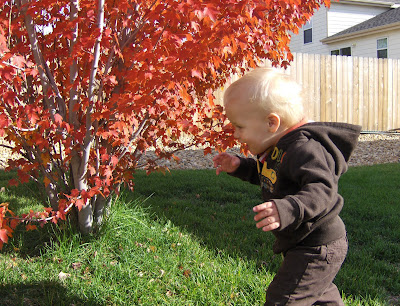 We also needed to get out of the house on Saturday, so I took him to a pumpkin place about 3 miles away. We only stayed for about 45 min. but it was still fun. I recently heard of a better one about 6 miles away, so I hope we can go there sometime too. 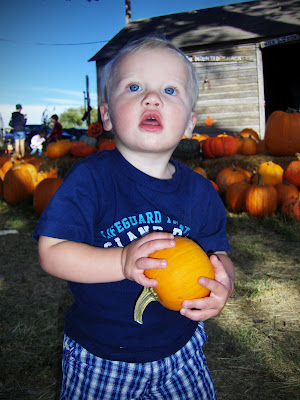 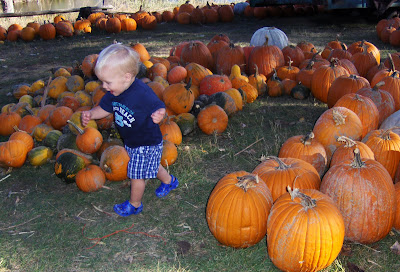 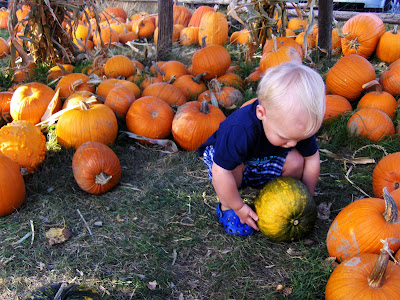 This is my favorite picture ever right now. 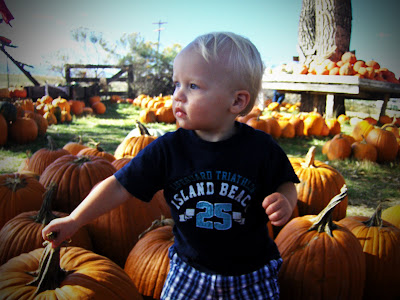 Yesterday was the first day I actually felt guilty for being a working mom. It is remarkable actually, becuase Jay is 15 months old and he started going to the babysitter when he was 3 months old.
I dropped him off at one babysitter and then picked him up and dropped him off at another babysitter because I had parent teacher conferences. Finally at 6:15 I picked him up and we went home to spend an hour and a half together before bedtime. The main culprit to the guilty feeling is that I wasn't feeling good and I wanted to be at home with Jay (not at school).
Jay on the other hand was thrilled to have such excitement in one day. The first babysitter (on his first day) took him to the park and he got to play in the sand. The next babysitter has three kids and he LOVES thier toys. He never cried when I dropped him off and wasn't eager to leave either. I guess it was my feeling, not his.
I also think he has had such awesome babysitters that I have never had to worry about how or what he was doing.

We had his 15 month dr. appointment this week. He is 25 lbs and 31 inches tall. 60th and 50th percientile. He has reached all the develomental milestones and he is getting 2 molars on his right side.

The teeth don't seem to have bothered him much at all because he is a happy camper most of the time.

Silly things I want to remember about these months: He loves dipping everything. Today he learned to dip his quesadilla in sour cream. He is happiest when we go outside for 1/2 hour or more when we get home from babysitter/school. He is facinated with opening and closing things and going up and down small steps (he still can't do the big set of steps). He does not have the patience to learn many things unless they are funny. I am trying to make things I want him to learn (nose, eyes, mouth...) funny so he will learn them. He loves climbing on things, but when he gets up there he says "sit down" and points down (because he knows that we are going to say that). He also loves throwing things in the washer and dryer for me, and can say "shoes", "eye", "do-dur" (yogurt), and more.
He doesn't actually point down in this video, but it is still cute.
I can't get the embed to work so here is the link:
http://www.youtube.com/watch?v=I2JiXj22UiU
Posted by Angie at 11:17 AM 2 comments: